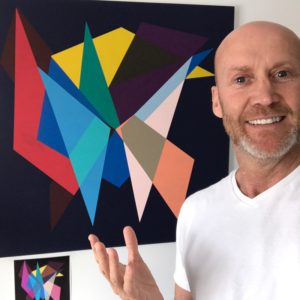 “As far back as I can remember I have always had a love for linear geometrics and colour field paintings. I see the world we live in as a place full of linear-geometric constructions with enhanced colour vibrancies. My fascination for both these art forms has inspired me for many years, from great artists such as Piet Mondrian, Wassily Kandinsky, Jackson Pollock and Mark Rothko. I feel that many of the works from these fine artists represent some of the most intellectually fascinating and visually stimulating geometric and colour field art ever conceived.”

Fraser loves abstract in all forms but Digital, Geometric, Hard Edge, 3D and Minimalist are what fascinates Fraser the most. Colour field plays a huge part in his experimentation and creation. Focusing on sharp lines, three dimensional shapes and multi-layered optical illusions, Fraser prepares his visions digitally, before transferring these creations to ‘one-off’ original pieces.

When creating linear-geometric abstracts, Fraser prefers acrylic paints on canvas, birch-ply and aluminium surfaces. There needs to be an edge to his work, whether that be using gradients, texture or subtleties in the colour. For geometric works that are resin coated, this extra element protects the finished pieces from moisture, heat and physical stress whilst enhancing colour and shine.

When sculpturing tactile Geo-mesh Art, Fraser hand moulds aluminium mesh that has been precision sprayed with acrylics and varnishes, creating a colour changing landscape of possibilities. The synergy when merging with geometrics, can create some stunning results!

Fraser’s goals are to conceptualise, capture and design new and enticing art that delivers a capacity to create fascination, evoke deep thought through beauty as well as engage great emotion and distill mood for the viewers.

Fraser was born in Edinburgh in the late 60’s. On leaving school he took a few years out, touring the US before returning to the UK to reside in London for the next 25 years. In 2015, Fraser relocated to West Sussex where he now works from his home studio.

From the early 90’s Fraser performed in a touring cabaret troupe that took him around the world, performing in the countries of all 5 continents. Apart from performing, Fraser both acted as manager and designer, creating many of the costumes, stage props, backdrops and promotional material. During this time, his passion for creating became his new focal point. By the end of the 90’s, in the midst of the .com boom, a change of direction towards designing and developing websites ensued.

Since the turn of the century, Fraser has created, managed and maintained websites for hundreds of clients ranging from legal firms to celebrities. Using programs such as Paintshop Pro, Paint, Illustrator and the industry standard, Photoshop, these self taught graphic design skills gave Fraser the tools to progress into creating physical art from digital creations.

Fraser’s studio is located within his home in West Sussex, where he now showcases his work in the physical form at open studio days and gallery trails as well as online through his website and social media outlets instagram and facebook.

Should you be interested in commissioning a piece of Fraser Renton Art, please get in touch by [clicking here].

This site uses cookies. By continuing to browse the site, you are agreeing to our use of cookies.

We may request cookies to be set on your device. We use cookies to let us know when you visit our websites, how you interact with us, to enrich your user experience, and to customize your relationship with our website.

Click on the different category headings to find out more. You can also change some of your preferences. Note that blocking some types of cookies may impact your experience on our websites and the services we are able to offer.

These cookies are strictly necessary to provide you with services available through our website and to use some of its features.

Because these cookies are strictly necessary to deliver the website, refusing them will have impact how our site functions. You always can block or delete cookies by changing your browser settings and force blocking all cookies on this website. But this will always prompt you to accept/refuse cookies when revisiting our site.

We fully respect if you want to refuse cookies but to avoid asking you again and again kindly allow us to store a cookie for that. You are free to opt out any time or opt in for other cookies to get a better experience. If you refuse cookies we will remove all set cookies in our domain.

We provide you with a list of stored cookies on your computer in our domain so you can check what we stored. Due to security reasons we are not able to show or modify cookies from other domains. You can check these in your browser security settings.

These cookies collect information that is used either in aggregate form to help us understand how our website is being used or how effective our marketing campaigns are, or to help us customize our website and application for you in order to enhance your experience.

If you do not want that we track your visit to our site you can disable tracking in your browser here:

We also use different external services like Google Webfonts, Google Maps, and external Video providers. Since these providers may collect personal data like your IP address we allow you to block them here. Please be aware that this might heavily reduce the functionality and appearance of our site. Changes will take effect once you reload the page.

The following cookies are also needed - You can choose if you want to allow them: